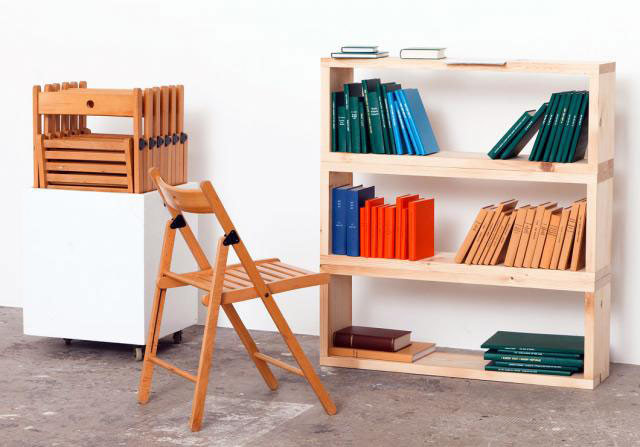 ÂŦThe Serving Library is a collectively-built archive. It consists of three parts: 1. an ambitious public website; 2. a small physical library space; 3. a publishing program which runs both through the website (#1) and through the space (#2). This is a long-term project being developed by Stuart Bailey, Angie Keefer and David Reinfurt. Together we are just beginning so we need your help to build our library and construct a new model for this old institution.

The Serving Library is an archive assembled by publishing. Publishing and archiving have always been either end of a continuous loop, but now on an electronic network like the Internet, the two activities are both simultaneous and indistinguishable. This makes particularly small public libraries increasingly redundant. It’s time to reconsider what kind of library makes sense right now, and suggest one possible way forward.

The Serving Library follows directly from ten years of independently publishing Dot Dot Dot, a biannual arts journal printed in a run of 3000 copies, with broad international distribution co-founded by Stuart Bailey in 2000. Dot Dot Dot then led to establishing Dexter Sinister in 2006, a self-described « Just-in-Time Workshop and Occasional Bookstore » run from a modest basement on the Lower East Side of New York City. Evolving from a publication to a bookstore, we now want to expand from these relatively private activities to a more properly public sphere by developing a new library where materials are collectively produced, assembled and pooled to maintain a body of shared information that serves the committed community who helped make it.

We will build our library by publishing. Bulletins of the Serving Library will be a hybrid electronic / printed publication offered first as PDF files freely available, released in serial form on www.servinglibrary.org. Twice a year, these concise booklets will be collected, printed, bound and distributed. We’re ready to publish the first collection of Bulletins now. This first set directly addresses libraries, archives and collections and includes « An Octopus in Plan View » by Angie Keefer, an 8-part text on communication organized around the anatomy of an octopus; « From O-1: Information on Libraries & From 1-0: Information on Recording » by Rob Giampietro & David Reinfurt, on the paradox of contemporary archiving in the face of the Internet; and « The Life and Death of Media » by Bruce Sterling, an out-of-time plea for compiling an exhaustive list of outdated media formats.Âŧ